by Kay of The Foundation & Donwill of Tanya Morgan 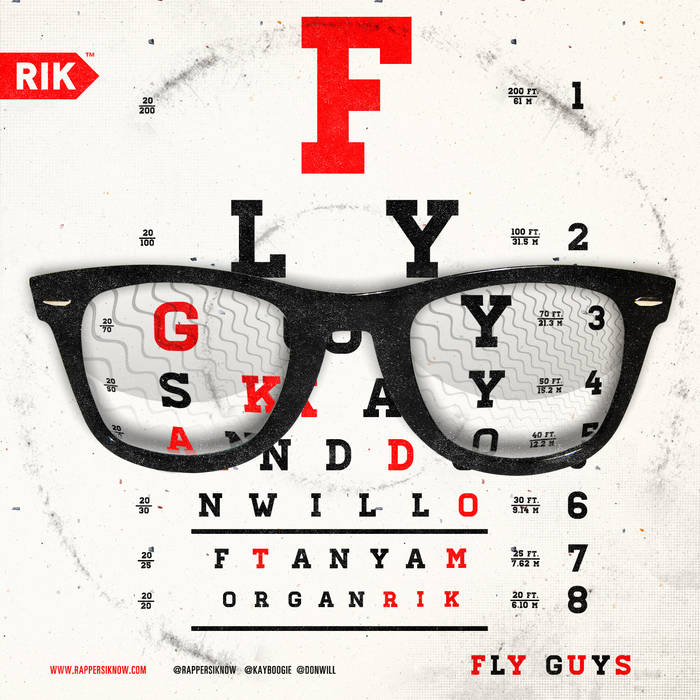 Phat beat track for all the dilla heads out there... excellent rap too. Favorite track: Fly Guys With Glasses.

Kay of The Foundation & Donwill of Tanya Morgan as Fly Guys

Been so busy lately that I forgot to tell you guys the story of how this Fly Guys finally got to see the light of day.

I'm not going to tell you how long ago this project was recorded, because it's almost embarrassing to say. Let's just say a few years....

Unbeknownst to most of us who are usually in the know, Kay and Donwill started working on a collaborative project, enlisting the production services of The Are and 8 Months to provide the backdrop. The idea was simple: knock out a quick EP, feature a couple of homies (i.e. Von Pea, Che Grand, The Luv Bugs), and put it out. Simple, right?

Not quite. At some point, the fully recorded project just.... disappeared. Donwill started posting cryptic tweets about an elusive "Fly Guys" EP that was complete, but suddenly M.I.A. I saw, but didn't really pay it any mind. While Kay was on one of his infamous "pilgrimages", I spoke to Don, who had been trying to get in touch with him. He told me that if I ever catch up with Kay, to see what's up on the FG because, as far as he knew, it was done. I still had no idea what Fly Guys really was, but I was pissed that Kay had done a project without me knowing. "Pissed" is really too strong of a word, but i'm going for dramatic effect here.

In November of 2011 I got a call from King Midas of H.I.S.D. Turns out Kay was meeting him at his studio, and was going to have his computer in tow. THE computer. (If you've already heard this story before, bear with me.) Long story short, I drove over there at 2 am, spoke to Kay for the first time in who-knows-how-long, and talked about the contents of his computer. We discovered that there were a countless number of songs / albums dating back to 2001 or so. I couldn't sit idly by, knowing that there was a digital goldmine in there. So I asked for one of the boldest favors ever:

"Say, uh... lemme hold your computer for a few weeks."

It felt like I was asking for sole custody of his firstborn. Insert awkward pauses and nervous glances. I just knew that if Kay left that night with the computer, there was no guarantee that any of us would have that opportunity again. I didn't have anything to lose.

He reluctantly agreed. If there's a level between "reluctant" and "hell no", that would be a better descriptor. I grabbed the computer and ran before he had a chance to change his mind...

I won't bore / anger you with the details of what's on the drive. I'll just skip ahead and say that the Fly Guys project was one of the first gems that I uncovered. I was enraged because 1) I was basically listening to a completed project and 2) the s**t went hard. I decided on the first day of having Kay's computer that the Fly Guys would be released. By any means necessary. Even if I had to burn bridges.

I hit up Donwill, who was cautiously relieved to hear that someone had found the project. He filled in most of the gaps that I needed to get everything arranged. I hit up FWMJ, who began working on a cover immediately. (Okay, "immediately" might be a stretch.)

Blahblahblah, a few months later, and here it is. I'm pretty sure that The Are and 8 Months had all but forgotten about the project. Probably seems brand new to both of them. Thanks to them for their patience. Once again, we of the RIK collective are proud to present yet another stellar release, Kay & Donwill as The Fly Guys. — D Randle