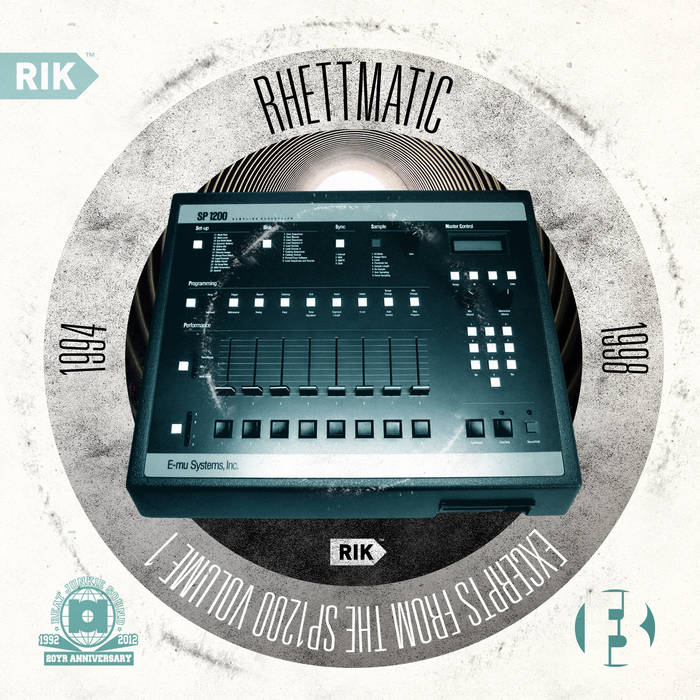 Ah yes, the E-MU SP-1200…..the vintage drum machine sampler that has been used on a lot of classic Hip Hop albums. I remember when i first got my SP back in 1991, when they reissued the SP1200 with the black finish. The original version had grey finish; i bought mine for $2000…..that was a lot of me back in the day. This machine was made popular by producers such as Marley Marl, Dr. Dre, Dj Muggs, Large Professor, Q-Tip, Madlib, & of course Pete Rock….i was inspired to get one because all of my favorite producers during the late 80's & early 90's were using this to make all the classic Hip Hop songs that we all know & loved so well. My first official SP1200 beat on wax was the Key-Kool & Rhettmatic's "E=MC5" song with Ras Kass, LMNO, Meen Green, & Voodoo…..

Speaking of Pete Rock, this particular music project was inspired by a picture taken two years ago, which had Pete, Babu, & myself, that posted up on Instagram a few weeks ago. When i posted up the picture, i went to my home studio and was just staring at my SP1200…..I haven't used that machine in such a looooong time. On some sh*t & giggles, i decided to hook up the SP and just listen to old beats; some were pretty dope, & others i was thinking "what the hell was i thinking?!"…haha! Just for archive purposes, I decided to dump the beats on to Protools.

Fast forward to 2012, listening to these beats definitely brought back memories. Obviously, most of these beats haven't seen the light of day…..some of them I tried to shop them, but they mostly ended up in the archives when i switched to the Akai MPC 2000. I currently use the Propellerhead 'Reason' music software & It's very interesting to hear my own progression in music production…..After listening to my old SP1200 beats & going down memory lane, i thought it would be cool if people had a chance to listen themselves…..well, I wouldn't say I was excited to put it out….LOL! I took some Instagram pictures of my little session, & people were leaving comments saying that they wanted to hear them. Because of their 'influence', i decided to hear them. Luckily, my friend FWMJ of RappersIKnow was willing to help me out & help disperse the music into the worldwide web (he was actually one of the people on Instagram that encourage me to share the music).

So now, what you hear right now is some of old stash of SP1200 Beats that were made from 1994-1998. I actually recorded the beats straight from the SP1200, without any additional mixing…..just straight arrangement, & added scratches & sound effects to keep a little things interesting. What you hear is straight, raw, gritty, 12-bit texture, mono SP1200 beats with the ringy tone samples & smacking drum sounds. I hope you enjoy listening to them (& hopefully you're not making fun of them) while walking down memory lane with me. Who knows, if the response is positive, i might put out more beats to listen….& maybe actually make some new ones too!

Produced by Dj Rhettmatic for Beat Junkie Sound
Recorded at The Sound-O-Matic Lab - Cerritos, Ca.
Beats are from 1994-1998